Even though I haven’t ‘beaten’ the challenge in past years, it’s a fun way to track my gaming and pick which game to play next, so I’m at it again!

Link to my Challenge Spreadsheet!

I’m starting with easy and just trying to fill down the Tier 1 column to begin with, to keep things simple for myself. I’ve also got a Bingo card that I made for myself and a friend, which I’ll be filling out on the side. In case anyone else is interested, here’s the blank: 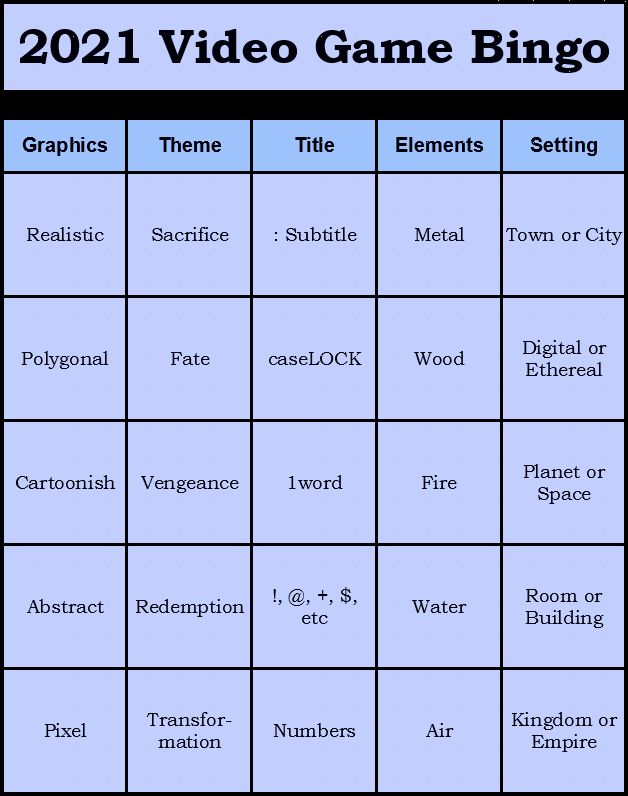 Cat Quest (RPG) - bought on Nintendo’s indie new year sale. A super cute game, if a little tedious. Enough of a hack ‘n’ slash that I could play while listening to podcasts or watching Twitch streams, which means I probably missed a bit of story details, but there WAS an interesting story which surprised me. I might even buy the sequel!

Oxenfree (Platformer) - who knows what ‘platformer’ means anymore? Not me. It’s a sidescroller and there’s, like… platforms. Anyway, this was fun and interesting, and definitely one I’d recommend, but I was told to play it twice through and it’s just slightly too tedious to make multiple playthroughs worthwhile for me, personally. I should have played once through collecting none of the collectables, and again collecting them all. Ah, well. I probably WILL replay this again in a few years, it’s just the kinda creepy my scaredy-cat brain likes.

A Good Snowman is Hard to Build (Puzzle) - I’m counting this as completed even though i only did the ‘normal’ puzzles and not the ‘dream’ puzzles. Literally just a puzzle game, nice little challenge and the art was cute, but eh.

And then for my Bingo Card: 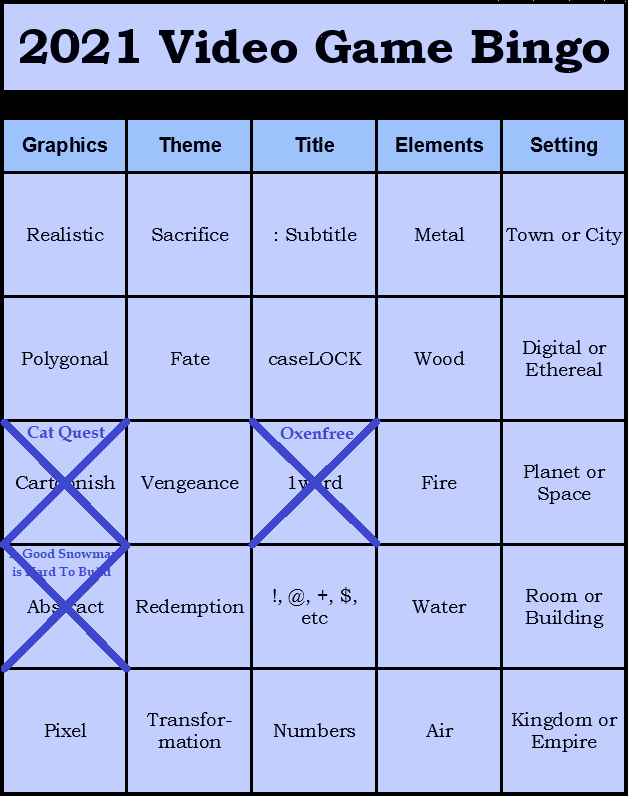 Outer Wilds (Non-Existing Creature) - A friend of mine was bugging me to play this about all of 2020, said I would love it, so during the New Years sales I finally grabbed it on Epic and I decided to try it out the beginning of this month.

I’m still recovering from it. I couldn’t play anything for a week after and every game I looked at had to be emotionally lite because I knew a) I wouldn’t be able to handle another emotionally heavy story anytime soon, and b) literally nothing I played would stand up to Outer Wilds and so I didn’t want to play anything that even tried. It’s so weird knowing I’ve already played my Game of the Year and it was only February.

This game has Themes and Messages galore and I’ve already tried and failed to express the emotions this one made me feel on my video game blog so I’m not gonna try again. I can’t stop thinking about it. I won’t ever be able to stop thinking about it. Different people will have different reactions obviously but for me this was a perfect fit.

Magical Otoge Ciel (Visual Novel) - The aforementioned emotionally lite game I finally decided to play next, a free-to-play dating sim I found on Steam years ago and just never got around to caring to play. The writing is actually decent, and the art and characters were cute.

Hiveswap Act 2 (Point and Click) - I backed the Kickstarter years ago and still only just got around to playing Act 2, which came out late last year. I never played the Friendsim game and I realized I probably wouldn’t get around to it for a while longer, so I finally decided to get the main title knocked out. I have… some issues with it, but mostly it was enjoyable and I’m still looking forward to Act 3 (in another 3 years probably).

And, once again, the updated Bingo card: 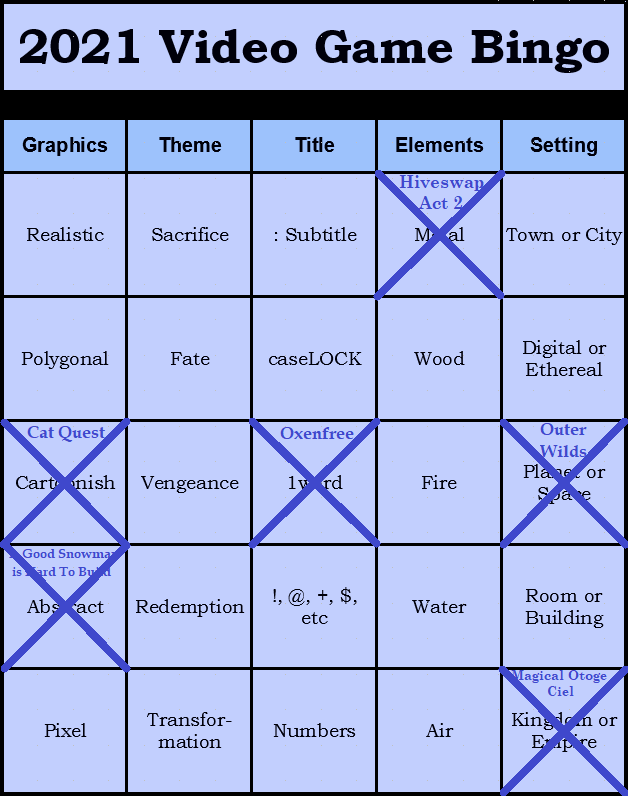 Thief: Gold (Stealth) - Another instance of me cheating on this list a bit; I actually just watched a Let’s Play for this one. I got through most of the first mission before deciding I hated the controls, couldn’t see anything on my screen anyways, and found the mechanics too difficult to dive into anyways. I like stealth, but I guess I’m too babied by the modern stealth genre. That’s fine with me.

This title has that fun 80s/90s bonkers fantasy vibe that doesn’t make sense but you just go with it. I was planning on going through this whole series this year (including the reboot) so I’ll see if I can make it through those titles.

RiME (Child) - Would have been a very great game if I wasn’t wrung out on grief stories already. Puzzles were fun, art was pretty, mechanics were good, it’s honestly a solid game. If only I’d played it before my GotY… It also felt a bit like someone mashing ICO and Journey together, oddly? I wonder if it’s just a common vibe of artsy indies.

Super Mario Odyssey (2017) - Finally proving once and for all that Mario is not for me. I learned about Assist Mode literally right before the final boss battle; I probably would have enjoyed this a lot more if I hadn’t been forcing myself through a 3-heart challenge. Also, why did everyone call this a ‘semi open world’? Do I just misunderstand what open worlds are? Anyway, most of the easy puzzles were fun to figure out. I just wish I’d realized Assist Mode was there, honestly.

The World Next Door (2019) - Alas, the game that Pyre wanted to be, and still ultimately a disappointing experience. The gameplay, I should say, is perfect. Love the VN-meets-combat style that Pyre failed on, I found Assist Mode right away so I could just focus on having fun instead of replaying scenes over and over, and the little story feels very YA-fantasy (appropriate, distributed by VIZ). It’s just a shame they never DO anything with the worldbuilding, characters, or plot. Reminded me a lot of a AAA game that ends before the plot does, forcing you to buy DLCs to finish the story… but there’s no DLCs (>glances at Mass Effect).

And the updated Bingo card: 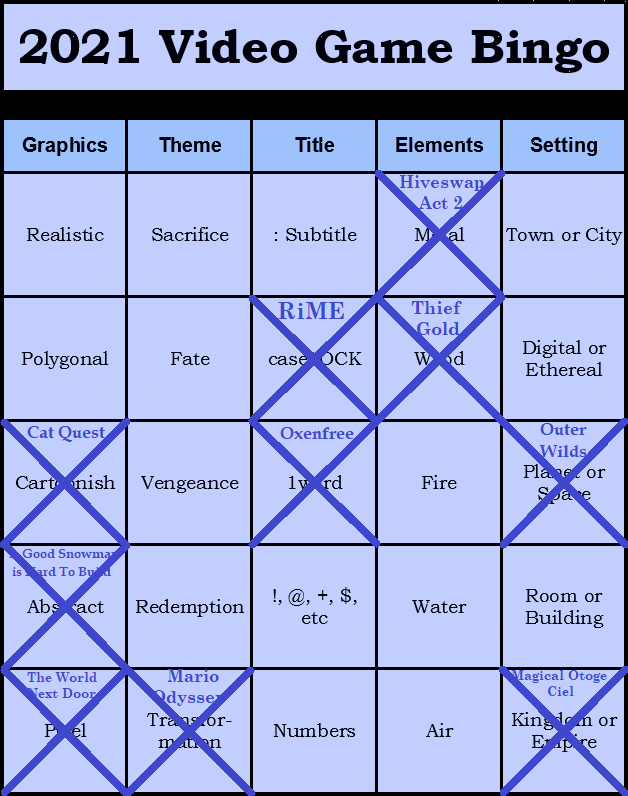 Cattails (Real Life Animal) - This is the only game I was able to get to during a… weird and heavy and otherwise extremely busy month for me. As I’m writing this I technically haven’t even finished it yet, but it’s like Stardew Valley in that I could play the game forever if I don’t give myself a jumping-off point, and the previous goal of ‘until I finish this arbitrary quest’ has shifted to ‘until I pick up Pokemon Snap after work today’.

It’s actually a fun game though. Warrior Cats meets farming sim. You play a cat, expand your clan’s territory, hunt wild animals, mine gems for some reason, and so on. I was craving a farming sim that I wouldn’t feel guilty about dropping after ten hours or so and I think I’ve put at least twenty into this one. 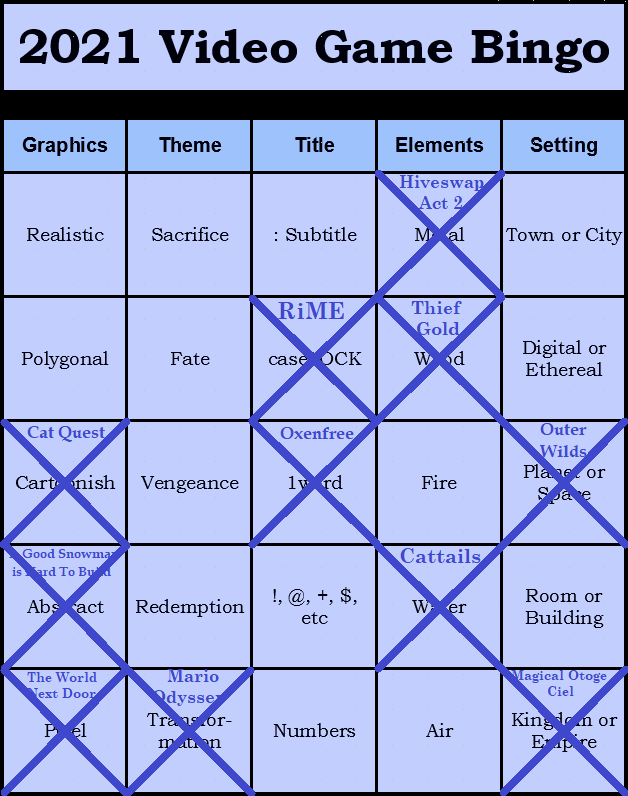 New Pokemon Snap (Shooter) - It’s a rail shooter so I’m counting it! The first new release this year that I’ve been waiting for, and it did not disappoint. Fun gameplay, bit of a puzzle-solving element as you try to figure out how to get certain pictures, plenty to do for hours and hours. I’ve seen some people complain that the game is very handholdy and the dialogue scenes ARE a bit too lengthy, but… it’s just safari simulator. There’s not much to be holding your hand for!

Kingdom Classic (Strategy) - This was free on Steam a while back. I never beat it, though I did play several hours. It’s deceptively difficult; with practically zero hand-holding or explanation of what’s going on, you’re left to figure out how the world works through multiple attempts. The side-scrolling design is a really cool take on the strategy genre but it also got really difficult to navigate once the kingdom grew over a certain size. I could spend a whole game-day just going from one border to the other. I might try the sequels, but I’m not sure.

Night in the Woods (Everyman) - It’s been over a week and I’m still not sure how I feel about this game. I mostly enjoyed it, though the pacing felt very slow, and I was often sleepy while trying to play more than an hour. The characters were fun to get to know and I wish I could go back and explore all the scenes I didn’t manage to find in my first playthrough, but with how long this took to play (I don’t know exactly, but it felt like at least 13 hours) I know I’m not gonna have the attention to devote to a second run. I’m also being nitpicky when I say I wish some of the more vague worldbuilding elements were more clear.

Return of the Obra Dinn (2018) - Oooohhh man, probably the best puzzle-solving game I’m gonna play this year. The graphics are weird and amazing, I’ve been talking about the musical choices non-stop for days, and the way that the clues to the puzzle reveal themselves organically is both frustrating and immensely satisfying to uncover. I will confess to looking up further hints on where to find those clues on the internet, but only so I could properly beat the game in two sittings.

What Remains of Edith Finch (Walking Sim) - I… eh. This game has so many 5-star reviews that I feel bad feeling meh about it - maybe I just played it at the wrong time? This is not the year for me and grief stories. It reminded me a little too much of Dear Esther for comfort (a game I wanted to love but was ultimately very let-down by). At least this one wasn’t intentionally nonsensical, but the stories this game told didn’t fill me with any sort of cathartic emotion on the meaning of life and death or whatever. I just felt like this wasn’t a very healthy (mentally, or to each other) family.

And the Bingo card: 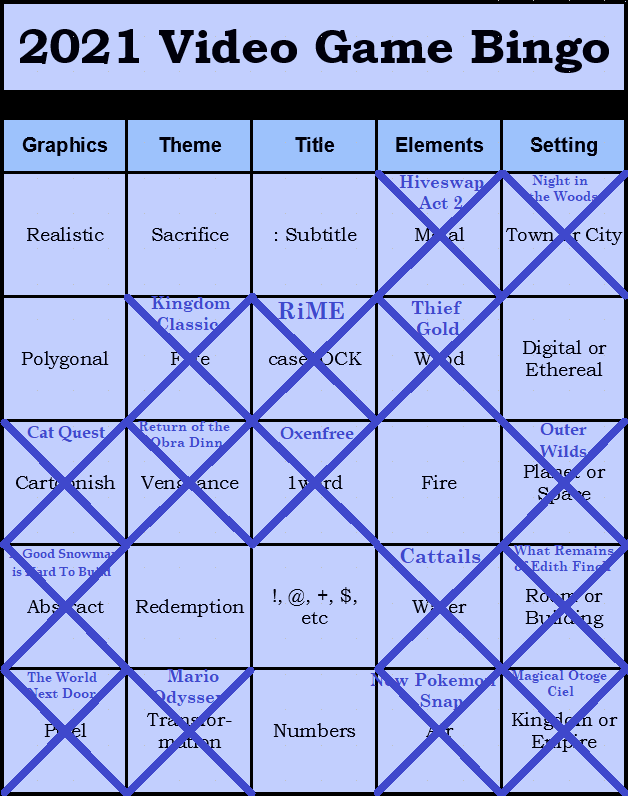