Throughout my life, I have been entranced mainly by two things; film and video games. I grew up either sitting in the dark comfort of the theater, watching films that I would never have seen otherwise if it weren’t for the support of my father, learning about this experience and that, or sitting in front of the glow of a tiny screen, experiencing new concepts and areas with the innumerable presses of my fingers on the inputs. My love for both mediums has often gone hand in hand, and has lead to a bleeding effect where I consider myself both a cinephile, and gamer (without the connection to its recent political affiliation of course).

Stylistically, cinema is the closest medium to videogames. Both rely heavily on technological advancements to draw crowds and are entrenched in the commercialistic world. The majority of the public views movies as an art form, but not all movies are regarded as art (Martin, 2007).

I have often pondered both mediums as forms of art, and am curious as to others thoughts on this and perhaps your experiences with games you consider as such. I don’t intend for this post to be high-brow by any means but rather a means to start a well-intended conversation on a topic that constantly gets brought up even now, roughly 60+ since the first alleged game was created, as something to be defended rather than discussed with intrigue.

This SMBC comic encapsulates relatively well my thoughts on the subject 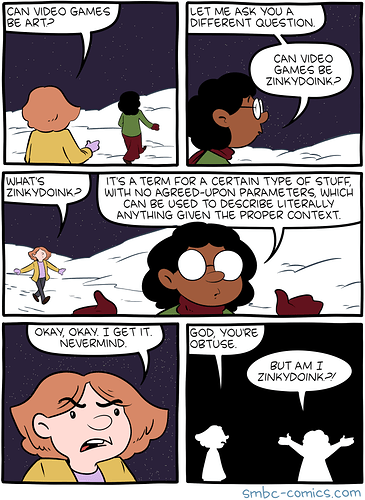 I think the more fundamental question is how you define art. It means different things to different people, and that’s a slippery slope. You can’t build on top of it.

On a more personal level, I think of art as any form of creative expression that forces some kind of self-reflection. In that sense, yes, games can absolutely be art. Because of my definition, games that force you to make moral choices are more ‘artistic’ to me. Examples include BioShock, Spec Ops: The Line, Hacknet, Orwell etc.

I really liked the idea of Spec Ops: The Line and the emotions it brought up in you as you experienced the story first hand. I guess, I am not trying to define what is or isn’t art but rather games that people feel are art or art that they enjoy or are examples of exemplary piece of art, more along those lines. I feel wholeheartedly that video games as a medium are art.

I think the commonly accepted ‘artistic’ games are the ones that employ some form of non-conventional mechanics to deliver a unique experience. Games like Shadow of the Colossus and Journey. I also think that some other games can’t really be called ‘art’. Maybe some of the mainstream shooters? Call of Duty, PUBG and so on.

Like any other medium, I guess it’s up to the creator to define if there’s a deeper meaning/quality to a game. Some of them do, while others don’t.

Video games of course classify as art… I think the question behind the question (ie the real question) is can games be good art, or more specifically can they be deep, meaningful, impactful, unique, thought-provoking, beautiful, etc. ART in all capital letters. 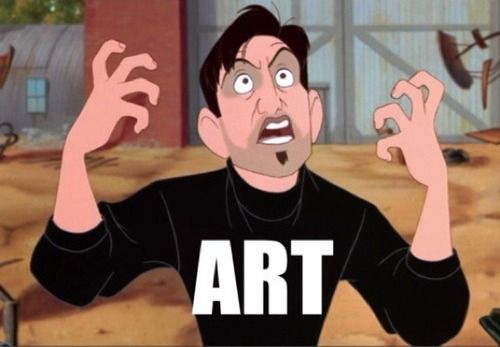 Which, you know, maybe not, lol. Video games are definitely part of an extremely entertainment-focused industry, and pretty much all releases (particularly those from bigger studios) are going to be following well-worn trends. Which is fine IMO – and that isn’t to say nothing moving can come from such titles.

Personally I find this topic more interesting in regard to games having an effect on people in ways that can’t be pulled off in other mediums – where the player’s control is absolutely vital for said effect. Something like Katamari Damacy for example is more engaging for me to discuss as art within the medium of video games, as opposed to more narrative-driven “cinematic” game experiences. Katamari would not work as a book, or a movie, or a sculpture. (Though I’d love to see a huge one IRL lol.) Actually I recently learned that the creator of this game (Keita Takahashi) literally was a sculptor – so this was a unique case where an actual artist wound up leading a video game project.

Katamari at any rate is a very simple and silly game that just has you rolling up a ball of random stuff. But in the act of playing the game, one can’t help but rethink all the ordinary environments found in everyday life. Just what is all this stuff? There sure is a lot of it, and it all exists together on one big (or perhaps little?) planet. The game makes you look at everything from different perspectives. At first your katamari is as small as a thumbtack (a single room can be a world), but by the end of the game it can swallow up entire islands (the world is really just one room in the cosmos). Everything (and I mean everything) will all be rolled up in a metaphorical katamari someday – how much meaning will any of it have by that point? Let’s all just enjoy the time we have as best we can until then, I feel the game is saying. Try to appreciate the little things in life more. It’s nothing deep (and the creator has insisted that the game was never intended to mean anything), but it’s all rather moving for a game framed entirely within the most bizarre of comedies.

Interesting question. I have also thought about it many times. I wouldn’t say every video game automatically qualifies as art. Art has to have a certain exceptional quality, originality, creativity and evoke a certain feeling of elevation. I don’t think there necessarily has to be a message, it could be art for arts sake. In video-games this could be articulated through art style, story, music, characters, worlds, creation of multiplayer networks and modes of interaction. A well made video game can definitely be a work of art!